Report of the Recreation Commission 2018

To the Honorable Board of Selectmen and Citizens of the Town of Hanson.

The Hanson Recreation Commission was established in 1990 to advance recreation and leisure-time activities that enhance the quality of life for residents of Hanson and the surrounding communities. The purpose of the Recreation Department is to meet the diverse recreational, cultural, athletic and leisure-time pursuits of the residents with a broad based comprehensive and inclusive program. Recreational programs are organized to encourage participation and enjoyment and should be held at safe and well-equipped facilities on a year-round basis.

The current Recreation Commission held its first meeting of 2018 on January 8th at Camp Kiwanee. The commission consisted of Chair, Annmarie Bouzan, Vice Chair, John Zucco, and members Diane Cohen, Brian Fruzetti, Brian Smith and Theresa Coccio. A new contract for “Yoga in Nature” was approved and we submitted our Year End Report for 2017. We also were scheduled to be screened before the Community Preservation Commission (CPC) on January 10, 2018, in order to seek a grant for new docks at Cranberry Cove. Diane Cohen would be attending that meeting.

Later in January, 2 members of the commission and Town Manager Michael McCue began then interview process for a new Recreation Director. The REC Commission also learned of a $20,365.71 increase for an overrun for the new septic system and a $20,000.00 increase for plumbing services for that system. We would need to get a warrant for approval at Town Meeting in May.

In February, John Zucco was able to secure the domain name www.officialcampkiwanee.com in order to use it for a new website for the camp. www.campkiwanee.com was not available and was not owned by the town. Melissa Scartissi was added to the REC Commission and the commission voted to hire Joshua Wolff as the new Recreation Director.

March brought some devastating storms to the area and downed trees at the camp needed to be removed at a cost of $8,000.00 which was covered by insurance. We also saw significant erosion between Needles Lodge and the Wedding Cottage, as well as trees that still needed to come down per order of the Tree Warden. Diane Cohen submitted a request for new docks at the Cove to be added to the Capital Improvement Matrix and a grant application for the docks was submitted to CPC. The Hanson Business Network’s St. Paddy’s Day event was a success again and Joshua Wolff was officially hired as Recreation Director.

In April, spring maintenance continued throughout the property. The Gazebo was updated with a new floor and windows and repairs to the Wedding Cottage were done by caretakers Ed Hanlon and Bob Hunt. There were some flooding problems at the bathhouse due to heavy rains which caused the tight tank at the Cove to overflow. The tank had to be pumped more frequently because of the weather. On April 9th REC Commission Chair, Annmarie Bouzan informed the commission that she was resigning from her post effective April 30th. Camp Cleanup Day, which had been scheduled for April 21st was now re-scheduled to May 12th.

A grant from the CPC for $80,000 was secured for the purchase of new docks. Joshua Wolff sent out a survey to the townspeople and the top three requests were for non-sports related after school activities, music programs and active recreation activities such as hiking, trail walks, etc. Diane Cohen was sworn in as the new REC Commission Chair and caretakers Bill Johnston and Colin Bain started an Instructional Fishing Club at the camp.   Purchases and signups for Cranberry Cove passes and swim lessons continued as the summer season approached and due to the extremely hot summer days, there was a large increase in the sale of day passes at the Cove.

Chris Fennessy was hired as the new Town Facilities Manager at the end of May and the new septic system was finally completed. Seasonal staff for the summer was also hired and Emma Mousette was re-hired as the Beach Director. The old docks were removed from the beach and sold for scrap in preparation for installation of the new docks, which were installed in time for the Cove opening. It was also determined that the stove in the kitchen of Needles Lodge was falling into a state of disrepair, due to its age, and will eventually need to be replaced along with a venting system to meet today’s current fire codes.

Opening day at Cranberry Cove was a success and the fun continued all summer. The camp held its first movie night on August 22nd. Fall and winter event planning was in the works and the Hanson PTO scheduled its first ever Polar Plunge for January 27, 2019. The Hanson Business Network also scheduled a St. Paddy’s Day dinner for March 16th, 2019.

The Family Halloween Party on Oct. 28th was a huge success and we want to thank all of the many volunteers who helped to make this an amazing day for the children and families of Hanson. We also want to thank the Hanson Business Association/Network for working collaboratively with Josh Wolff to insure the event went smoothly. A 2nd movie night was also held on November 9th in the Needles Lodge. The new docks at Cranberry Cove were also winterized for a one-time fee. Our town facilities manager now knows the procedure and can do them at end of each season.

As the year came to end, REC Commission member Theresa Coccio resigned her post, the Hanson Firefighters held another fabulous “Breakfast with Santa” at Needles Lodge, and a 3rd movie night took place on December 15th. On December 17th, the Recreation Director turned in his resignation and his last day was December 28th. Prior to his departure Joshua did submit a budget for the year 2020.

2018 was a successful year for family activities at Cranberry Cove and special events at Needles Lodge. 70 events including wedding, corporate, business and family events were held at the lodge and 36 events are already on the books for 2019. REC Commission Vice Chair, John Zucco was also successful in securing back the domain name www.campkiwanee.com for the town of Hanson. Updates to the fire and security system are in the works, as well as planning of recreational events and programming for summer and after school.

We would like to thank our Administrative Assistant, Lan Woodward and our caretakers and beach staff for their help and assistance during 2018. We would also like to acknowledge the town entities that came to our aid and support again this year, including the Highway Department, the Board of Health, the Fire Department, the Police Department and the Town Administrator, as well as the Board of Selectmen. We are grateful for the citizens of Hanson who have helped support us in our mission to maintain and protect this beautiful camp, event space and beach area and look forward to a successful 2019.

Join us for our Winter Paint Night at Camp Kiwanee! 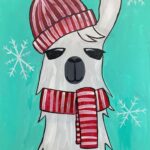 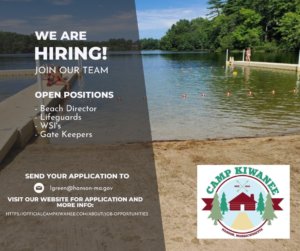